Inflation Sucks SALE: Save 15% on all prints and merchandise

All of my items are print-to-order, and with the busy season, I can no longer guarantee items will arrive in time for Christmas

Your shopping cart is empty.

Your shopping cart is empty.

Blog > My First Photos of the Milky Way

My First Photos of the Milky Way

Back on Saturday, June 20th, I made a rash decision that ended up in a night of photography that I will never forget. I have been spending time recently studying how to take Milky Way photos as it is something I have a great interest in. Living in a big city, I don't ever get to see the Milky Way unless I hop in my car and drive for a few hours. I have actually only seen then Milky Way a couple of times in my entire life. Around 7 PM back on June 20th, I went to a website to study some more techniques on photographing them and at the end of that particular webpage was a calendar that showed the best nights of the year to photograph the Milky Way. It has to be a night where the Milky Way actually shows up, and also a night when the moon doesn't appear in the night sky. And as I looked at that calendar, it showed June 20th as one of the best nights of the year. I then looked at the weather up on the North Shore and saw it was a clear night without much wind.

That is the best possible combination. I debated for all of 5-minutes and then quickly got my gear together and got ready for a drive to the North Shore. Now, before I get to the next step, it's a 3+ hour drive for me to get from my house up to Split Rock Lighthouse. Since it was already 7:30 PM at this point, that meant that I wouldn't arrive up there until close to 11 PM. And if I took photos for an hour or two, I would then have to drive home in the wee hours of the morning. But one thought kept pushing me out the door and make the trek: You have to take risks to get the best photos, and staying home never gets you the best photos. So I made the trip.

I arrived at the park at 10:50 PM, stepped out of my car, and couldn't see my hand in front of my face. It was that dark, which was perfect. I looked up to the sky and was blown away at how many stars I could see. I grabbed my gear, and made my way to the beach. I chose a spot where I could see the lighthouse to the left of me, and Ellingson Island to the right. To start with, I pointed my camera towards Ellingson Island and took my first test shot. That first test shot is what you see up above. The glow above the island is the city lights from Duluth, MN. The Milky Way was poking its head out from above some clouds, and you can see a couple of objects that left some streaks in the sky.  I never saw those objects, but my camera picked them up, so I do not know what made them. Not bad for a first-ever photo of the Milky Way, if I don't say so myself.

I packed up my gear and headed back to the trail to get to another area of the beach. As I was walking along that trail, I got to a point where I was just blown away by how the Milky Way looked with the treetops. So I took the photo that you see below. 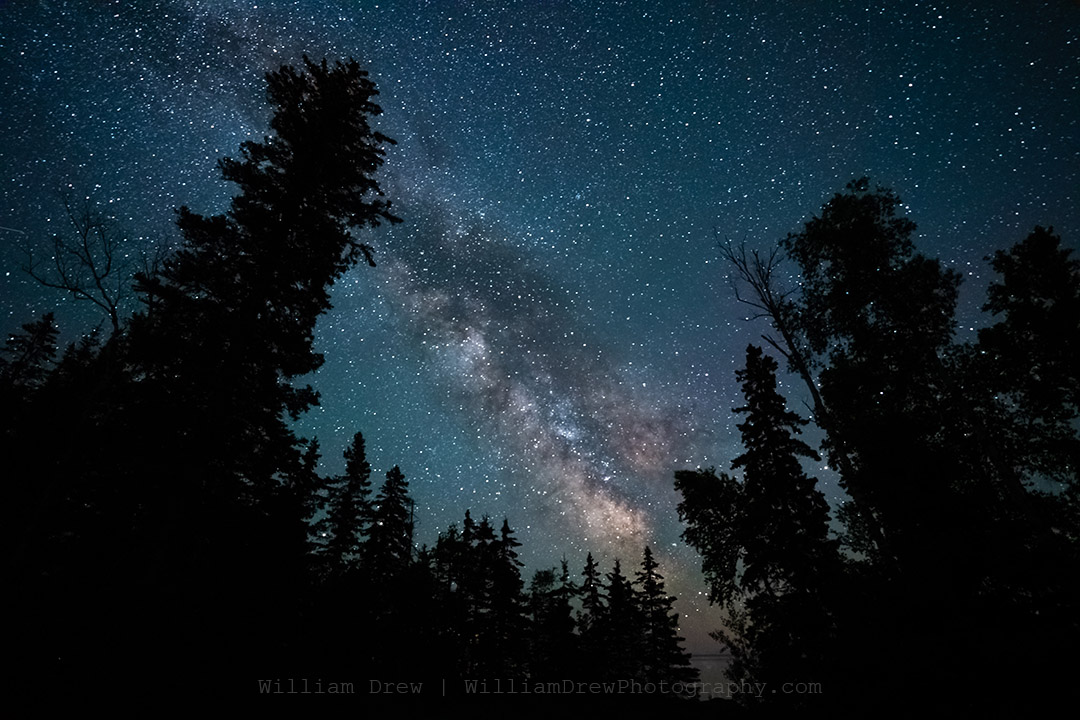 You can see Lake Superior at the bottom of the image above. It was such a perfect spot to photograph the Milky Way. After getting this photo, I made my way back to the other part of the beach and made sure to get to a position where the Milky Way lined up perfectly with Ellingson Island. And once I did that, I was able to capture this scene: 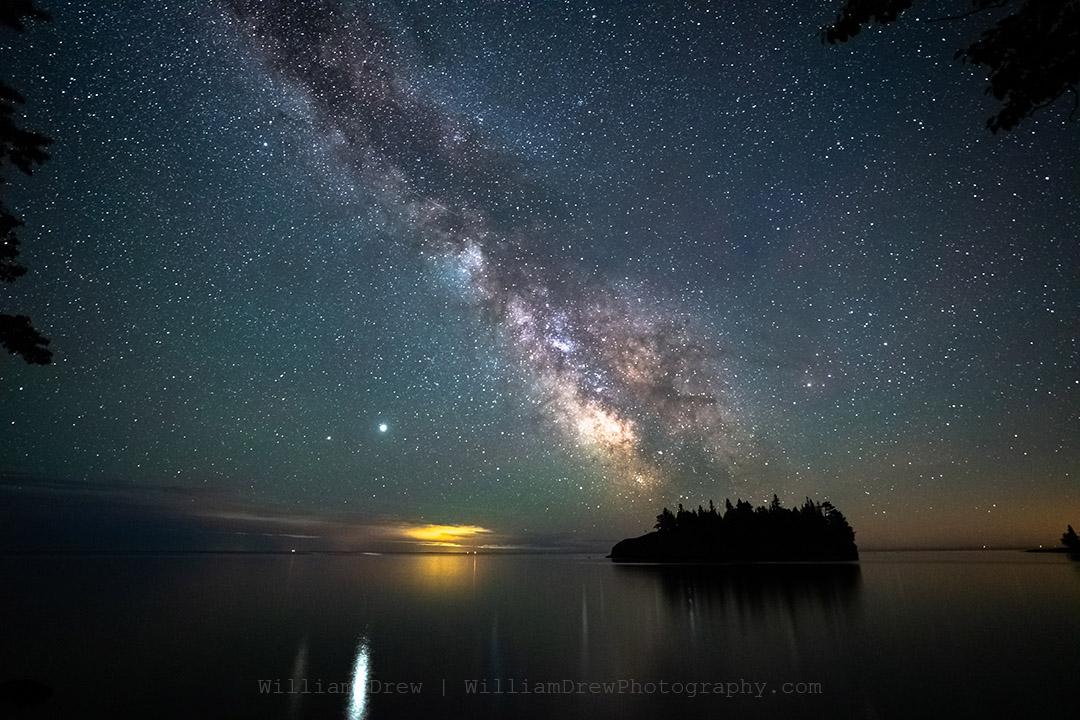 That bright light in the photo is the planet Jupiter. This was the last photo that I took, and I then made my way back to my car. It was now 12:20 AM and I was about to start the 3+ hour drive back to Minneapolis. Even though I arrived home after 3 AM, it was absolutely worth it.

This was absolutely one of my all-time favorite nights of taking photos. It was just magical standing there on the big lake, seeing all of those stars, and having the place all to myself. It was a peaceful, quiet, and magical evening.

Over this past weekend (July 18th), I made another trip up to Two Harbors and Split Rock Lighthouse to again try and photograph the Milky Way. This time I had enough notice that I booked a hotel room so I did not have to drive home afterward. However, that evening saw a heavy thunderstorm pass through so I did not get a chance to get more astrophotos. I did wake up early enough to get some photos of the early morning light at the Split Rock Lighthouse, including watching the sunrise right above the lighthouse. I'll have those photos ready to show you in the near future.

Thanks for reading, and I hope you enjoy these Milky Way photos as much as I loved taking them!

The presence of this badge signifies that this business has officially registered with the Art Storefronts Organization and has an established track record of selling art.

It also means that buyers can trust that they are buying from a legitimate business. Art sellers that conduct fraudulent activity or that receive numerous complaints from buyers will have this badge revoked. If you would like to file a complaint about this seller, please do so here.

The Art Storefronts Organization has verified that this business has provided a returns & exchanges policy for all art purchases.

Did your prints arrive damaged? Please keep all packaging and contact me for further instructions to replace your prints: (651) 503-2697 or william@williamdrewphotography.com

This website provides a secure checkout with SSL encryption.

The Art Storefronts Organization has verified that this Art Seller has published information about the archival materials used to create their products in an effort to provide transparency to buyers.

Your cart is currently empty.

This is only visible to you because you are logged in and are authorized to manage this website. This message is not visible to other website visitors.

This means you can use the camera on your phone or tablet and superimpose any piece of art onto a wall inside of your home or business.

To use this feature, Just look for the "Live Preview AR" button when viewing any piece of art on this website!

Below, select which favorite lists you would like to save this product into.

This means you can use the camera on your phone or tablet and superimpose any piece of art onto a wall inside of your home or business.

To use this feature, Just look for the "Live Preview AR" button when viewing any piece of art on this website!

Plus exclusive access to new releases and VIP discounts.